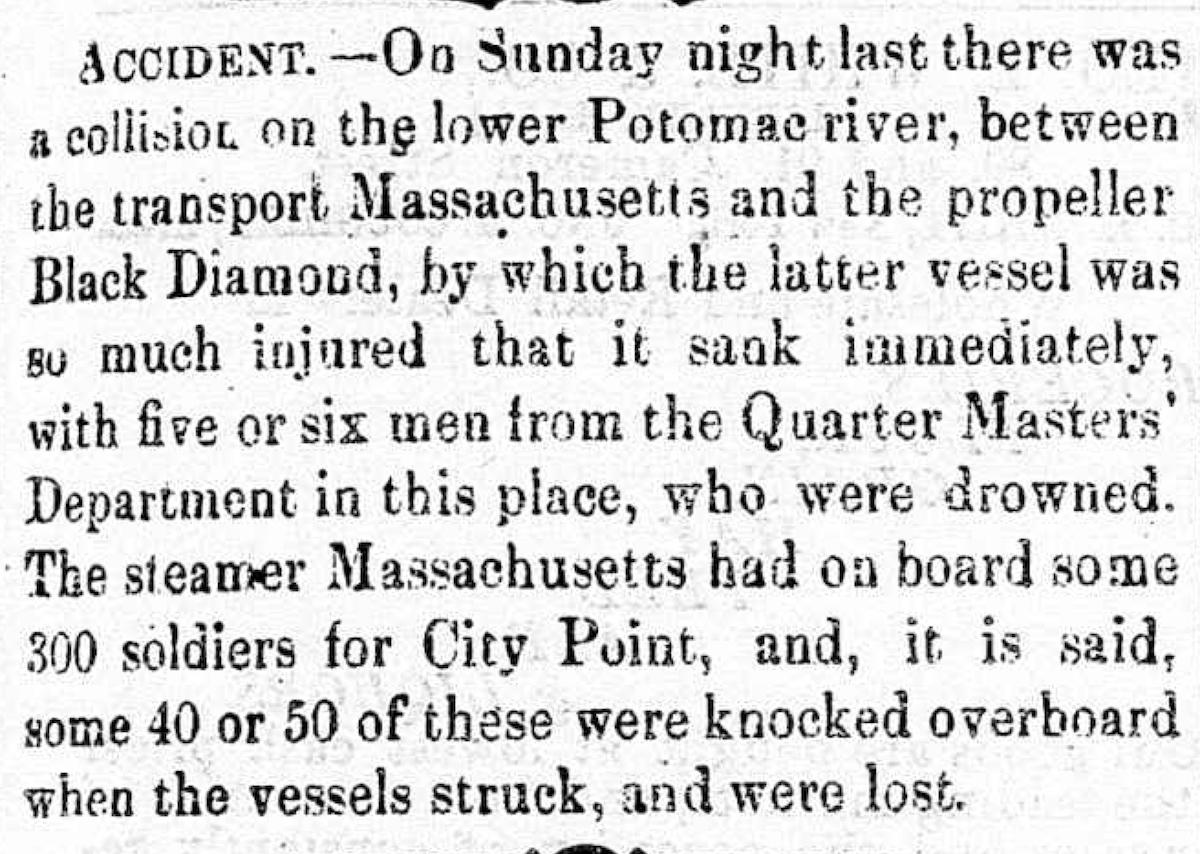 Accident--On Sunday night last there was a collision on the lower Potomac river, between the transport Massachusetts and the propeller Black Diamond, by which the latter vessel was so much injured that it sank immediately, with five or six men from the Quarter Master’s Department in this place, who were drowned. The steamer Massachusetts had on board some 300 soldiers for City Point, and it is said, some 40 or 50 of those were knocked overboard when the vessels struck, and were lost.

Yesterday morning, at half-past twelve o’clock, the side-wheel steamer Massachusetts, Capt. Couch, bound down to Fortress Monroe, with a load of soldiers, the greater part of whom were exchanged and paroled prisoners, collided with a steamer named the Black Diamond, Capt. Meredith, a small back propeller, in the Potomac river, one mile from Blackstone Island, which was acting there as a picket boat, and had on board a guard of some twenty men.

The Massachusetts struck the Black Diamond on the port side, about the boiler, sinking her in about three minutes.

The soldiers on board her, thinking she was about to sink, a large number of them sprang over her sides and succeeded in getting on board of the Black Diamond, which had hauled up to render assistance, it being supposed at the time by the captain of the Diamond that the Massachusetts was the only vessel that had sustained any damage. Unfortunately, however, the Black Diamond had been struck amidship, which caused her to take in water rapidly, and she went down in a few moments after the soldiers had got on board of her.

Sixty-six of the soldiers from the Massachusetts, and four of the crew of the Black Diamond, are missing, and it is believed that they were all drowned.

The Massachusetts lay near the spot till daylight, picking up about a hundred men, who either jumped or were thrown by the force of the collision on to the wreck of the Black Diamond.

The bows of the Massachusetts were badly stove in, and it was with difficulty that she could be kept afloat.

Last night Captain Allen despatched a steam propeller down the river to the scene of the disaster, with men and hooks to search for the bodies of those supposed to be lost.

The Massachusetts, after the Black Diamond went down, succeeded in reaching Point Lookout in safety, when she landed the remainder of her troops.

The Black Diamond was a second-class steam propeller, chartered by the Quartermaster’s Department, and belonged to Philadelphia, where she is owned.

The Massachusetts, it is said, had her running light burning, but the Black Diamond, being anchored, showed but one.

Capt. J.M. Holmes, of the Third Veteran Reserve corps, was the officer in command of the troops, and from a statement made by him it appears that the loss of life, as near as can be ascertained at present, will exceed fifty.

The night was clear, but dark, there being no moon. It is impossible to say at present where the blame for this disaster is to rest.

On April 24, 1865 two steamboats, the Black Diamond and the Massachusetts collided on the lower Potomac River, killing more than fifty people. However, this disastrous event almost got lost amidst the media’s coverage of the manhunt for John Wilkes Booth. Accounts of the disaster first appeared in local newspapers on April 26. A more detailed account appeared in the national news the next day, April 27. Even so, the accident was almost immediately overshadowed again by news of Booth’s capture which appeared in newspapers on April 27. The first article is one of the earliest reports of the Black Diamond disaster and appeared in the Alexandria Gazette on April 26. The second is an report on the accident from The New York Herald on April 27, representing the national news coverage.